Community comes together for the Arum Lily Blitz

The first year of the three year Arum Lily Blitz has seen excellent results due to the contributions made by hundreds of people – landholders, government agencies, donors, volunteers, spray contractors, community groups, businesses and champions willing to stand up for the campaign.

The following provides a quick snapshot of the progress made in this first year:

Community volunteers working in the National Park:
The Yallingup LCDC volunteers started their work last year to get a headstart before the Blitz began. The area around Yallingup was divided in to 50 x 50 metre quadrats and volunteers assessed the arum lily density of 970 quadrats totalling an incredible 242 ha.  This mapping enabled control work to be prioritised as well as providing baseline data. This year the volunteers got trained up and began their spray program to control arum lily in the National Park. In conjunction with control being undertaken by Caves Caravan Park an excellent start has been made to protecting the values of Yallingup and surrounds.

The Friends of the Cape to Cape Track volunteers undertook arum lily mapping of the 124 km length of the Cape to Cape track. As with the Yallingup work the mapping will enable control work to be prioritised and will provide baseline data. Many volunteers are keen to take on the job of arum lily control and we will work with the Department of Biodiversity, Conservation and Attractions to achieve this. 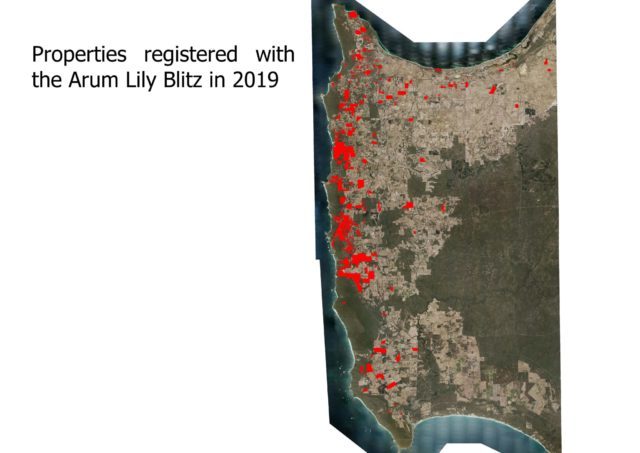